ProfEC Ventus is the second company in the world that has been accredited for the calibration of wind vanes. 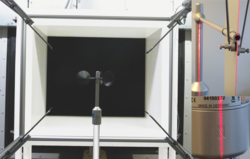 Oldenburg (renewablepress) - Wind measurements surely constitute one of the key factors in deciding whether a wind farm will be built or not. By calibrating sensors for wind measurements the risks for investors can be reduced considerably, as they deliver reproducible results, and any uncertainties of measuring instruments are accurately assessed and reported. As the second company in the world, ProfEC Ventus GmbH has now been accredited by the German Accreditation Body (DAkkS) for calibration of wind vanes, and by that is also recognized in context of the international organisation for accreditation bodies (ilac MRA). ProfEC Ventus to date is the only calibration laboratory to work according to the latest provisions of the draft standard of the International Electrical Commission (CDV IEC 61400-12-1 Ed.2:07-2015).

For one year, ProfEC Ventus has worked to obtain the DAkkS accreditation according to IEC standards. As a matter of fact, the high requirements for calibrated measuring instruments also apply to the executing calibration laboratories. “We are an independent, accredited Testing and Calibration Laboratory for wind measurements and sensors according to national and international standards (e.g. IEC, FGW, MEASNET). So of course, the requirements for how we have to prove the quality of our work are very high. The accreditation of wind vanes and anemometers complements our already existing accreditation for power performance measurements, energy yield prognosis, site assessments as well as wind measurements,” says Andreas Jansen, Managing Director of ProfEC Ventus.

Wind vanes are a key instrument, as they measure the distribution and frequency of wind directions. In return, the results are important for positioning the wind turbines inside a wind farm, as wake effects or the emission of noise on surrounding residential areas have to be considered during the wind project development phase. However, also during operation the correct yaw control is important to receive optimum yields while reducing loads at the same time. The sensors are calibrated in a wind tunnel in Oldenburg, Germany. The developed calibration procedure executed under pre-defined reference conditions focuses on comparison of the values measured by the devices to be calibrated to the results of a reference device, and yields reproducible results. In this way it can be ensured that anemometers and wind vanes deliver usable data regarding wind speeds and wind directions. The sensors’ measurement values are subject to certain tolerances indicated by manufacturers as a standard factory characteristic. If tolerances and deviations are not exactly defined by the calibration, the data gained during a wind measurement campaign in the field cannot be used for an energy yield report accepted by banks, or at least only in a limited way, as the uncertainties of the results are very high. “Investors are often not aware of the impacts that the uncertainties of non-calibrated measurement devices have on the economic viability and performance of wind farms,” says Mr. Jansen.

For this reason, ProfEC Ventus also provides the entire equipment required for calibrated wind measurement campaigns with minimal uncertainties. This includes measurement masts of heights up to 155 metres, as well as the complying with relevant standards of the IEC, Fördergesellschaft Windenergie (FGW TR6 Rev.9), and of the international measurement network (MEASNET). In addition to the calibration of wind vanes and anemometers, also sensors for temperature, relative humidity, barometric pressure measurements, the data logger as well as the complete measuring range are calibrated to be used during wind measurement campaigns.

The measurement results will be included in the energy yield assessment reports of wind experts, who are then able to, in combination with verified, historic weather data, forecast the future wind resource availability at a considered site. Here, one could say that any uncertainties are only natural. “However, uncertainties become smaller through the high data accuracy. This has a direct positive impact on the financing side, as banks have a very close look at the uncertainties mentioned in the wind expert opinion reports and respond to these by demanding increased interest rates, equity quotas or contingencies,” Mr. Jansen remarks.

He also recommends continuing operation of a measurement mast in the wind farm during the first few years of operation, in order to perform an IEC-compliant power performance measurement and verification of the wind turbine performance curve. Many big investors, energy supplier or wind farm operators do so nowadays, in order to be able to verify the wind turbine power performance contractually guaranteed by the wind turbine manufacturers. In doing so, investors build up pressure already during commissioning phase. Given the high investments involved in a wind farm, the respective costs are negligible. The operating costs for a fully equipped measurement mast amount to only about 2-3,000 Euro per year. “If a turbine for example produces five percent less power than expected or agreed, the revenues missed are disproportionate to the marginal, additional costs for the measurement mast,” he says.


ProfEC Ventus GmbH is the second company in the world that has been accredited for the calibration of wind vanes by the German Accreditation Body and is currently the only Calibration Laboratory complying with the standard CDV IEC 61400-12-1 Ed.2:07-2015 by the International Electrical Commission (IEC).
ProfEC Ventus worldwide performs measurement campaigns for wind farm projects envisaged and has a particularly strong presence outside of Europe.
Calibrated measuring instruments considerably reduce the risks for investors, as they deliver more accurate, verifiable data to serve as a basis for investment decisions and a wind farm’s economic success.

Press photos for editorial use only
Note: For the content of this press release the issuer / publisher of the release is »ProfEC Ventus GmbH« responsible.