The team of windtest grevenbroich gmbh would like to thank all customers and business partners for 25 successful years! Managing Director Monika Krämer adds: "The trust from our customers and partners is the basis for 25 years of successful business. Since 1996, windtest grevenbroich gmbh holds its claim of providing its services in the highest quality and for the maximum benefit of its customers. These values also became the basis for the successful launch of the subsidiary windtest north-america inc. in 2014. Together with great customers and partners like you, we have become one of the leading measurement and testing service providers in the renewable energy sector. We look forward to continue working with you! When you're ready for your next project, so are we."

1996: Founding of windtest grevenbroich gmbh and construction of a test site in the immediate vicinity of the company headquarters

1998: Installation of the first wind turbine on the company's own test site in Grevenbroich (Neurather Höhe). Since the test site was commissioned, a total of 16 prototypes of state-of-the-art wind turbines have been installed, tested and measured. For 23 years, the test site in Grevenbroich has thus been a pioneer of technical innovations and a flagship for the energy sector. Three wind measuring masts with heights of 80, 134 and 143 meters as well as an own verification station for remote sensing systems currently complete the test site.

2008: Relocation to a larger company building.

2011: The first own FRT container is in operation, thus significantly expanding the company's competence in the field of grid measurements.

2013: Commissioning of a verification station for remote sensing systems on the company's own test site.

2021: The international team of windtest grevenbroich gmbh speaks 14 languages and faces the future chal-lenges in the field of renewable energies with confidence.

Since 1996, windtest grevenbroich gmbh offers a wide range of services for the renewable energy sector, including measurements of power performance, loads, electrical characteristics and acoustic noise as well as site evaluations to establish site quality, wind, yield or shadow impact. The team of windtest grevenbroich gmbh supports and advises wind park developers, project planners, banks and insurance companies, is involved in national and international standardization committees and working groups, and plays a leading role in the MEASNET and IECRE cooperation. windtest grevenbroich gmbh owns and operates several test sites, has completed more than 7,300 projects worldwide in the last 24 years, and in early 2014 established a subsidiary in the USA. 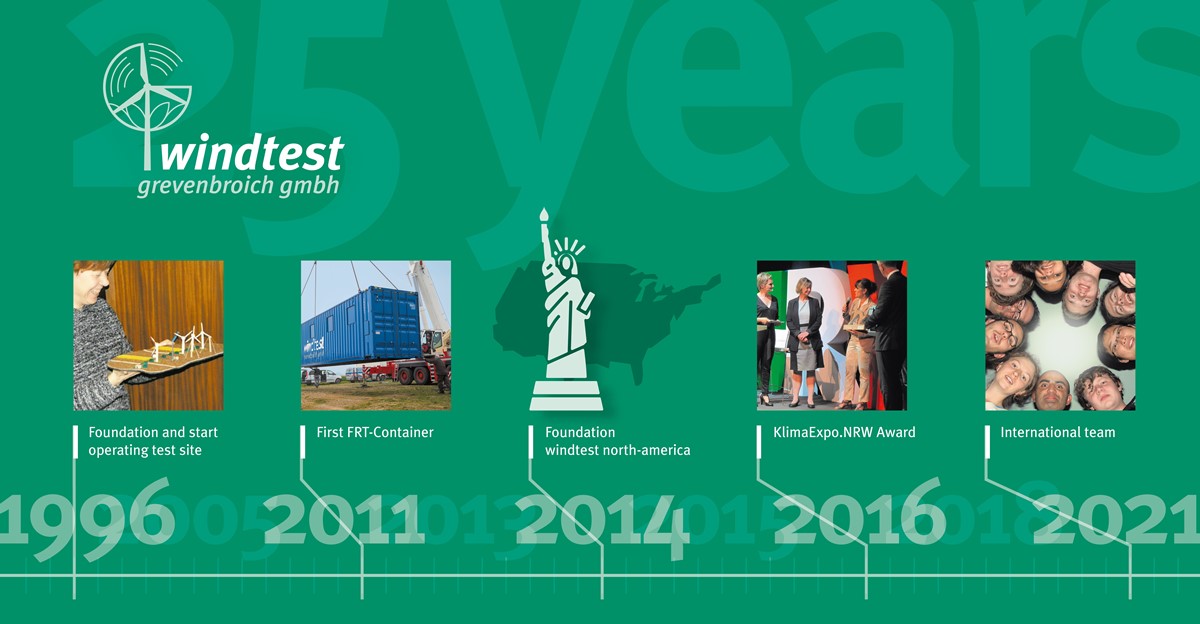 Press photos for editorial use only
Note: For the content of this press release the issuer / publisher of the release is »windtest grevenbroich gmbh« responsible.