Green shares on the upturn: RENIXX World gains 31 percent in 2015 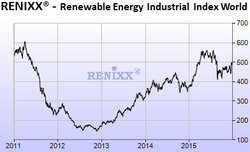 The clear winners in 2015 were shares in the three European manufacturers of wind turbines. The highest price gain in the RENIXX World in percentage terms was achieved by the Nordex share, which climbed by 118 percent in 2015 ahead of the Danish wind turbine manufacturer Vestas (up 115 percent) and Spanish supplier Gamesa (up 111 percent). US-based company First Solar (up 67 percent) ranked fourth - the first provider of solar power - followed by China\'s Jinkosolar (up 60 percent).

New composition of RENIXX as of 01.01.2016
As part of the regular recomposition on the basis of stock market capitalisation on 1 January 2016, Ballard Power and the Chinese wind turbine manufacturer Ming Yang were removed from the index. The German inverter producer SMA and the US-based solar leasing company Sunrun were newly included. 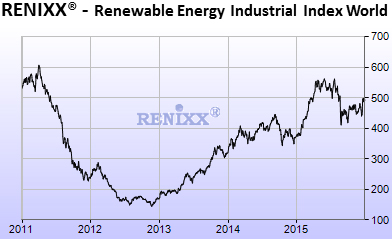 
About the RENIXX
The RENIXX World (Renewable Energy Industrial Index) is the first global stock index to register the performance of 30 of the worlds’ leading listed companies in the pioneering field of renewable energies. Inclusion and weighting in the RENIXX is governed by free-float market capitalisation. The RENIXX World (ISIN: DE000RENX014) can be called up world-wide via the international financial-information providers Reuters and Bloomberg and, for example, via the Financial Times.
ISIN: DE000RENX014, Reuters RIC: .RENIXX
Further information about the RENIXX World:
https://www.iwr-institut.de/en/services/renewable-economic-research/renixx-world-en
RENIXX-Online:
https://www.renewable-energy-industry.com/stocks/index.php?changeLang=en_GB
RENIXX via Financial Times:
http://markets.ft.com/research/Markets/Tearsheets/Summary?s=RENX:GER


Publication and Reprint free of charge; please send a voucher copy to
the International Economic Platform for Renewable Energies (IWR).

Press photos for editorial use only
Note: For the content of this press release the issuer / publisher of the release is »Internationales Wirtschaftsforum Regenerative Energien (IWR)« responsible.

In 1996, the International Economic Platform for Renewable Energies (IWR) was established as an independent and private service institution of the renewable energy industry. The IWR focuses on the fields of research, economic and policy consultation as well as media and international networks in the renewable or regenerative energies sector. One main objective of the IWR is to play an instrumental role in introducing and spreading awareness for an industrial, international business profile of the renewable energy industry.
Dr. Norbert Allnoch, Director of the International Economic Platform of Renewable Energies (IWR), 1995, on the definition: "According to our definition, the Renewable Energy Industry is one which takes an interdisciplinary approach to the issue of renewable energy supply (protecting both the climate and resources) and the construction of renewable plants and systems (industry policy for the three areas electricity, heat and fuel."Chronology of the Renewable Energy Industry - Important IWR contributions, including prizes and awards - 2007 Publication of the first structural analysis for a federal state according to the IWR-analysis method for renewable systems engineering and servicesï¿½(study "Zur Lage der regenerativen Energiewirtschaft in NRW" )2007 International network-contacts:IWR-director Dr. Allnoch speaks with King Harald V. of Norway and ï¿½slaug Haga, norwegian minister of energy Presentation of the network / RENIXX in the USA, dialogue with McGinty, environment minister of Pennsylvania2006 IWR starts renewable stock index RENIXXï¿½ (