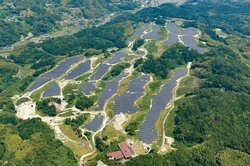 Shizen Energy has made the company’s purpose to “take action for the blue planet.” In doing so, Shizen Energy aims to spread the use of safe and sustainable energy through the global development of renewable energy power plants, in order for more people to live happily on Earth. Through the development, construction, operations, and maintenance of renewable energy power plants that are both high in quality, as well as rooted in the community, Shizen Energy will continue to accelerate towards the realization of a “100% renewable-powered planet.”