Largest single project in the history of the joint venture: juwi Shizen Energy connects 54-megawatt solar park to the grid in Japan

- The solar power plant is located on a former golf course about 100 kilometers north of Tokyo / Clean solar power for 19,800 households 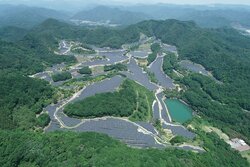 Project Sano City
© Juwi AG
Wörrstadt (renewablepress) - Juwi Shizen Energy, the joint venture founded in 2013 between the German project developer juwi and the Japanese developer of wind and solar parks Shizen Energy, has successfully connected the largest single project in its history to the grid in Sano City (Japanese prefecture of Tochigi) and has already handed it over to the operator. The fact that juwi Shizen Energy is a specialist in the construction of utility-scale ground-mounted solar parks with challenging terrain topography also benefits this project as the 54-megawatt is located on a former golf course about 100 kilometers north of the capital Tokyo.

The Japan joint venture has successfully implemented several projects of this kind in the recent past, most recently the Otaki Village solar farm on a former ski slope in Nagano Prefecture, where the 1988 Winter Olympics were held. Currently, the company is constructing the 121-megawatt Pacifico Energy Sanda Mega solar farm in Hyogo Prefecture, located in the Kansai region northwest of Osaka on Honshū Island, also on the site of a former golf course. Annual output will be about 143 million kilowatt hours. It is scheduled to go into operation in December 2023. It will then replace the Sano City solar farm as the joint venture's largest single project.

"We are very pleased to have completed the Sano City project two months before the actual handover date," says Jan Warzecha, Managing Director of juwi-Shizen Energy. "This underlines our high level of competence, professionalism and experience as a reliable EPC partner."


About the juwi group:

Juwi was founded in 1996 in the German state of Rhineland-Palatinate. The company is now based in Wörrstadt near Mainz and has been part of Mannheim-based MVV Energie AG, one of the largest municipal energy providers in Germany, since the end of 2014. The juwi group employs more than 1,000 people worldwide and has projects on every continent. There are subsidiaries in: Germany, Italy, Greece, South Africa, the USA, Japan, Australia, India as well as the Philippines, Thailand and Singapore.

To date, juwi has implemented more than 1,000 wind energy systems with an output of more than 2,400 megawatts at around 180 locations worldwide; in the solar segment there are around 1,800 PV systems with a total output of more than 3,200 megawatts. Together, these energy systems generate around nine billion kilowatt hours of electricity each year; In purely mathematical terms, this corresponds to the annual requirements of around three million households in Germany. For the implementation of the energy projects, juwi has initiated an investment volume of almost ten billion euros over the past 25 years.

https://www.renewablepress.com/press-images/juwi-ag/7d62b_Sano_City.jpg
Caption: "We are very pleased to have completed the Sano City project two months before the actual handover date," says Jan Warzecha, Managing Director of juwi-Shizen Energy. "This underlines our high level of competence, professionalism and experience as a reliable EPC partner."

juwi is one of the world’s leading companies in the area of renewable energy with a strong regional presence. The company offers project development and EPC services as well as products and solutions for the energy turnaround. Company activities are mainly projects with solar and wind.

The juwi group was established in 1996 in Rhineland-Palatinate. Since the end of 2014, Mannheim based utility MVV Energie AG has been co-owner and partner of the juwi-group. juwi has about 1,000 employees worldwide, branches on all continents and is actively engaged in various projects all over the globe. Working together with passion to implement renewable energy economically and reliably is what drives us.

So far, juwi has realized around 840 wind turbines with a total capacity of approx. 1,800 megawatts at more than 100 sites. In the solar segment, more than 1,500 projects with a total capacity of around 1,400 megawatts have been designed and constructed. Combined, these energy systems produce around six billion kilowatt hours of clean energy per year, equalling the annual demand of around 1.5 million German households. Within the past 18 years, juwi has initiated an investment volume of around six billion euros to realize these projects.