wpd increases its focus on the Taiwanese offshore wind market 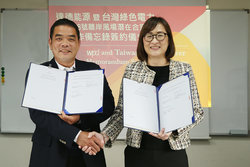 Bremen (renewablepress) - With several contracts, wpd is strengthening its presence and activities in Taiwan and intensifying its focus on this emerging energy market.

Ahead of future tender rounds, wpd signed an agreement with Taiwan Green Power Co, Ltd. (TGP), an offshore wind developer belonging to the Taiwanese LeaLea Group. The partners will jointly develop the offshore wind farm site No. 28, which is expected to be part of the third tender round in Taiwan. The project with a planned installed capacity of up to 600 MW is located off the coast of Changhua in an area with excellent wind conditions. Through its development LeaLea has already received the EIA approval and built up a lot of local support for the project. The joint venture with wpd is expected to be the perfect fit as wpd is known as frontrunner for the involvement of local companies in Taiwan and is overperforming with regards to the localization rules.

A further milestone was reached in the Yunlin project, when Thai Electricity Generating Public Company Limited (EGCO Group) acquired a 25% stake in Yunlin Holding GmbH, owner of the 640 MW Yunlin offshore wind farm, from wpd. As the transaction has now been closed, wpd has again been able to win another solvent and reliable partner for the project in addition to the Japanese Sojitz Group (27%), while wpd remains the largest shareholder in the project. The Yunlin project as one of the largest offshore projects in Asia is located in the Taiwan Strait, about 8 km west of the coast of the Yunlin district. The project will be constructed and commissioned in two phases, phase 1 with the first half to be completed end of 2020 and phase 2 with the second half in the third quarter of 2021. A total of 80 Siemens Gamesa SG 8.0 turbines will produce green electricity there.

Major steps have further been made regarding the 350 MW Guanyin project, wpd’s second offshore project in Taiwan. Here, wpd was able to make the construction schedule more effective and thus saved additional costs in order to comply with the 2020 tariff. Now the project is expected to be installed within one year (2022) and all major supply agreements have been adjusted to support this approach. While the signing of the supply agreements is expected in the next weeks, all is depending on the issuance of the last remaining permits in summer, followed by closing the financing in the fourth quarter of 2020.

"wpd values long-term partnerships and local footprint. In challenging times this becomes even more important and we are happy to strengthen our ties to Taiwan by introducing new investors to the country and by finding new local alliances. Taiwan will remain our key market in Asia,” says Achim Berge Olsen, COO of wpd AG.

wpd covers all areas of offshore wind energy from classic project development to project management, procurement of turbines and construction to operation and service of multi-megawatt turbines. In August 2015, the 288 MW offshore wind farm Butendiek was connected to the grid; in December 2017 Nordergründe with 111 MW. Several projects developed by wpd have already been approved and will be realised in cooperation with financially strong market players. In Germany, Finland, France, Japan, Sweden and Taiwan, wpd pursues an offshore pipeline of 7,400 MW and has become one of the leading European offshore developers in recent years.

The roots of the LeaLea Group, founded in 1979, lie in the production of textile raw materials such as polyester, where the company quickly won domestic and foreign fabric manufacturers as customers with established sales channels in more than 80 countries. Since its IPO in Taiwan in 1990, LeaLea has developed its portfolio towards upstream industries. LeaLea employs more than 1,650 people at various production facilities located in the Fangyuan Industrial Park, Changhua. The LeaLea Group is clearly committed to the Taiwan location. The group has long branched out into various sectors such as construction, retail, hotels, environmental technology, health care, food logistics and green energy and holds 5 listed companies.


About EGCO
Established in 1992 and listed on the Stock Exchange of Thailand, EGCO Group was Thailand’s first independent power producer with a turnover of US$1,341 million (Thai Baht equivalent) in 2019 and assets under management of US$ equivalent US$6,923 million (Thai Baht equivalent) as of Dec. 31st, 2019. EGCO Group currently owns and operates 28 power plants across Thailand, Laos, the Philippines, Indonesia, Australia and South Korea with total equity contracted capacity of 5,475 MW.

wpd is a developer and operator of wind farms both onshore and offshore, acting worldwide. Since 1996, wpd has installed 2,200 wind turbines with a total of 4,450 MW. Currently more than 1,500 MW are held as assets. A group staff of 2,200 is committed to wind energy in 21 countries. Internationally, wpd is planning projects in the scope of 8,725 MW onshore and 7,250 MW offshore. For years, wpd has been awarded the first-class “A” rating by the Euler Hermes agency (Allianz Group). Besides the favourable status quo analysis, this external assessment of creditworthiness also illustrates the company’s excellent future prospects.

wpd has played a determining role in helping to shape the wind industry since its early beginnings. The foundation for wpd was laid over two decades ago in Bremen. To this day, the head office is in the Hanseatic city. The former two-man operation has developed into a solid, mid-sized company.

EDF Renewables, Enbridge and wpd start construction of the ...

wpd announces the conclusion of a further PPA in Poland...

Tough battle against the rock: wpd europe GmbH completes in...

wpd in Spain continues on its track record

wpd establishes itself as a partner for PPAs on the wind en...

Expansion of the Management Board of wpd AG

wpd wins contract for over 100 MW in Poland